Somewhere in this phosphorescent goo we call a modern life...

Notes on the latest record

The Missing Pages is the new batch of songs from Lee Barber. The album is a collection of longing states, songs about the desire for clarity and love and individuality--about looking for what is real behind the load of crap folks tend to obsess over. It moves like a slow fire over water, unhurried and sensual, charmed by persuasive sirens. 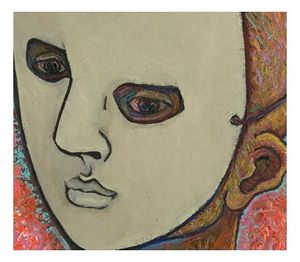 Born in New Orleans and raised within smelling distance of the Mississippi River, Lee has been writing songs since he was 16. When asked to describe his music, He might call it 'zen blues', though the sounds wouldn't be considered blues in any traditional sense. Still, the Louisiana native’s music is rooted in subtle and fundamental ways. At the same time, it’s modern, intimate and personal, with lyrics that often rub up against the daily experience of strangeness and wonder that is modern life.

When the songwriter released Thief and Rescue in 2009, the album garnered feature stories in the Austin American-Statesman, the Austin Chronicle, and on KUT radio. It appeared on several Best of 2009 lists and topped the Austin Chronicle’s list of Best Austin Albums of that year. It followed two critically acclaimed records with former band, The Barbers. His songs have been recorded by The Resentments and Ana Egge, among others.

Scrappy Jud describes Lee’s songwriting as “…like the Gulf of Mexico. He refuses no river or stream of thought. He takes them in, listens to their stories, the adventures they had on their journey south, and then he gives you a good tune to whistle when you're walking on the river road.”

For Lee, The Missing Pages is a beginning again in a lifelong preoccupation with the heart and craft of music making.

I am the son of a quiet preacher turned engineer and a church organist, raised in Baton Rouge, a college town and heavy industrial center on the banks of the Mississippi.  I was the dreamy kid who got lost on his way home from school, the one singing “Shenandoah” alone in his backyard and noodling on a harmonica, a nine year old lone ranger with a heart as big as the Atchafalaya swamp.  Though my parents were deeply religious, they had the good sense not to hide me and my sisters from popular culture.  I remember hearing “I Wanna Hold Your Hand” on a transistor radio when it was a top 40 hit.  Soon after, I was pretending to play in a band with neighborhood pals.  Upturned trash cans, bicycle parts, and broom handles were involved.  We mimed songs by Paul Revere and the Raiders, Herman’s Hermits, The Dave Clark Five, etc.  A few years later, my sister was bringing home records by Aretha, Dylan, Hendrix, Neil Young, The Band…  This was about the time my parents bought me a guitar and I started learning and writing songs.  I was sixteen and laid up in bed with mono, 'the kissing disease', when I learned my first chords.  I picked up finger picking patterns from a Leonard Cohen songbook.  The first performances of my songs were in church.  As you might imagine, these were some very earnest outpourings.

Things began to change when I discovered the nearby New Orleans Jazz and Heritage Festival and fell headlong in love with regional music.  I moved to Jackson Mississippi ostensibly to attend college, and formed a soul band called The Hounds.  We played a mostly black bar called Soops on Capitol Street, ate a lot of fried chicken, talked the talk, walked the walk.  After a while, I became restless with the music and opted out.

There were several years when I didn’t perform at all... just listened to everything I could get my hands on, exploring different ways to hear music.  I married Elaine Martin, a classically trained harpist and took up painting.  After a while, Elaine and Bruce Golden and I began getting together with like minded friends for improvisational camp meetings (invented sounds... by turns joyful and ugly).  We took inspiration from Captain Beefheart, Sun Ra, and other sonic adventurers.  The songwriting spigot had dried up for me some years before, but things that felt a lot like songs began raising their heads, knees and elbows into our very deliberate noise making.  We realized... "Hey, if we could get some songs into this thing we could do this in public!"  So we became a band and called it The Barbers.  Our music was dubbed 'zen blues'.  We were the greatest guitar/harp/vibes trio east of the Mississippi.  Van Dyke Parks heard a cassette and pronounced us "the hippest thing to come out of Jackson since Mose Allison."  We played clubs, oyster bars, and any place that would have us.  We once drove from Jackson MS to NYC in a buick station wagon to play what the locals referred to as 'the wife beater's matinee' at CBGB's with 'Zero Pop' and 'When People Were Shorter and Lived Near the Water' (they did a great thrash version of Gershwin's Porgy and Bess!).

Elaine and I relocated to Austin when she was hired to play with the Austin Symphony. We reformed the band with Jon Greene on drums and Charlie Larkey on bass. By now, the songs were the thing, with detours into our experimental past.  We played shows, raised two kids, and released a couple of well received records, The Barbers and You Know How It Is.  The press was good: “Underneath all of the unusual textures the Barbers have pieced together a batch of graceful often stunning songs.” - The Austin Chronicle, “…the songs ring like sweet calls from the soul.  You Know How It Is sounds possessed by a spirit.” - Austin American-Statesman.  And a personal favorite, “’Picture of Evelyn’ kicked my ass… ’Killed by Love’ is murder… yeow!” - Terry Allen.

The band unraveled and Elaine and I eventually split up.  I was left with a lot to think about.  Once again, things that felt a lot like songs began to surface.  I had met Brian Beattie (known today for his work with Okkervil River, Bill Callahan, Daniel Johnston and others) when he created a makeshift studio at Mercury Hall to record The Barbers’ You Know How It Is.   Before coming to Austin, I had been a fan of his band, Glass Eye, and we hit it off right away.  “This guy approaches music like a painter!”, I remember saying, inspired by his fearless approach to recording and his determination to breathe life into the songs.  When we crossed paths again he was building a new home studio.  I think he took pity on me in my high lonesome state and asked me to help him finish it.  In exchange, he would record some of the new songs that I had been working on.  The result was Thief and Rescue.  I think the album took listeners by surprise.  It garnered feature stories in the Austin American-Statesman, the Austin Chronicle, and on KUT radio.  It turned up as number one on the Austin Chronicle's list of top Austin albums of 2009.  Recently, the song "All Night Long", from Thief and Rescue, was recorded by well-loved Austin band, The Resentments.

Brian and I have recently returned to his “Wonder Chamber” studio and made a new recording of songs with like-minded musicians and friends.  The Missing Pages is a collection of longing states, songs about the desire for clarity and love and individuality--about looking for what is real behind the load of crap folks tend to obsess over.  It moves like a slow fire over water, unhurried and sensual, charmed by persuasive sirens.

As before, Brian turns the spotlight on what is essential about eleven songs.  Dony Wynn appears as the keeper of the violet, with sly below the belt drumming.  Elemental contributions are delivered by long time partners, Scrappy Jud Newcomb, Jon Greene and Craig Ross.  New and old friends, Dana Falconberry, Sahara Smith, Seela, Ramona Beattie, Grace London and Finley Sexton provide the siren’s smoke.

I’ve recently found a new enthusiasm in animation. The idea of combining art and music has always interested me and, with that in mind, I’ve created animated videos for a couple of the new tunes. "Modern Life" and “Sailor’s Song” were made with charcoal on panel and a tripod mounted camera - old school! You can view them on the video page. More to come!

Also recently, I’ve had the good fortune to become a grandfather!  I still hold down a trade school job as a drafter, and I'm still a sometimes hopeless stammering introvert looking for new ways to communicate.  I’ve never been to prison, but I’ve also never been one to pass up a good story for the sake of telling the truth.  My ambition with songs is to warm the blood… to tell it away.  I continue to write and sing songs because I’m convinced that everything that is worthwhile in life aspires to music.  Music is natural.  Music is play.  What else is there?